Note: This issue should be resolved by converting VS 2008 (SSRS 2005) RDLCs to VS 2010 (SSRS 2008) RDLCs and adding Microsoft.ReportViewer.WebForms.dll Version 10 reference to your .NET Framework 3.5 project’s references instead of Version 9

After few trials to find what is the wrong with my system, I did a quick search I found that this problem raised due to some Visual Studio 2008 hot fixes and updates which cannot be removed by the normal uninstall process. Therefore Microsoft provides Auto Uninstall Tool to completely remove Visual Studio 2008.

If you run this tool, the below screen will be displayed. just click Yes to start the cleaning process. 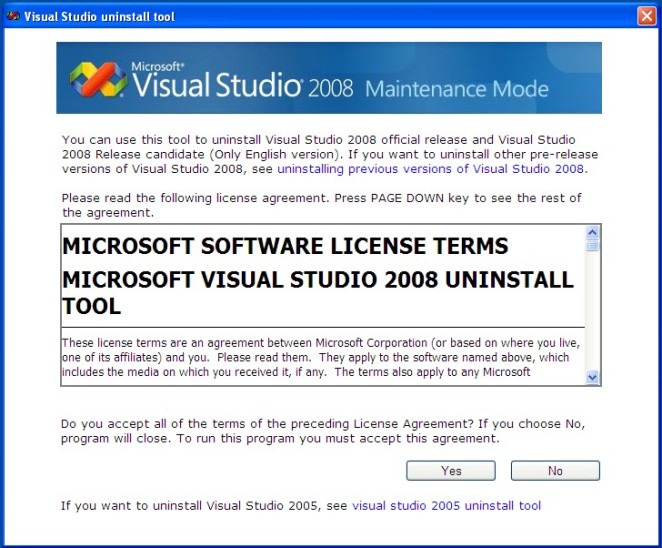 Let’s get back to the main reason I did this blog post for. I used Visual Studio 2010 to open ASP.NET application developed using .NET Framework 3.5. I got the below message when I tried to open RDLC report.

This message asks if I want to convert RDLC report format to 2008. After I canceled the conversion, the report designer showed “The version of the report definition language (RDL) is not support by Visual Studio 2010 Report Designer” message as you can see at the following figure

It supposed that Report Designer 2010 has the ability to open and edit the previous RDLC formats for the sake of back compatibility.

I recalled that after SSRS 2008 was released, developers were not able to create RDLC reports in 2008 format and the reason of that is Visual Studio 2008 released before SQL Server 2008!.

However, I still have the ability to convert the report to RDLC 2008 format which is weird. .NET Framework 3.5 “Microsoft Report Viewer” control doesn’t support RDLC 2008 format in Local mode.

The following figure shows the message you’ll get if you try to run RDLC 2008 report under .NET Framework 3.5.